Charlottetown, PE – The Legislative Assembly of Prince Edward Island is set to resume Thursday, February 25, 2021 with a new Speech from the Throne. After nearly two years in power, the King government is resetting its agenda. 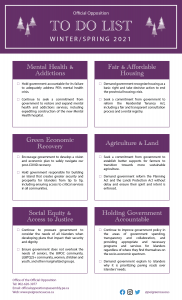 “Islanders have seen decisive action when it comes to our COVID response, largely guided by Dr. Morrison, so it is deeply troubling that we see such a complete absence of decisive action from Premier King on a number of other critical matters,” said Peter Bevan-Baker, Leader of the Official Opposition. “PEI has some serious and complex issues that were affecting Islanders long before COVID arrived, and will be there after the pandemic passes: mental health, housing, agriculture and land, and implementing a just and clean economic recovery. Government must come forward with a vision and execute a coherent plan to tackle these wicked problems.”

During the pandemic response, the King government was given access to critical federal dollars to help with a safe restart of our Island economy, increasing capacity for safe and affordable housing units, childcare, and transportation infrastructure.

“Sadly, despite the millions of dollars available to help PEI build a strong foundation for a post-COVID recovery, Premier King only chose to use federal dollars to pave the backroads and by-ways of PEI,” said Bevan-Baker. “It is unconscionable that his government would not also use these millions of dollars to help set PEI on a stronger foundation and a stable path as we begin to emerge from this pandemic.”

“On Monday Islanders were given a preview of what we will find in tomorrow’s Throne Speech. As seems to be the pattern of the Premier, we heard promises, stories, and grand ideas, but very little details. This just won’t do,” explained Bevan-Baker. “ Islanders have been very clear and vocal on their dissatisfaction with the response of Premier King and his cabinet on the critical issues that are impacting families, youth, seniors, and Island businesses. The King government must prove that it really is about people. Now is the time for action that leads to wellbeing, equity, and resilience for our Island home, its people and our economy.”

In the interest of transparency and accountability, both the Throne Speech submission and priority list can be found here: