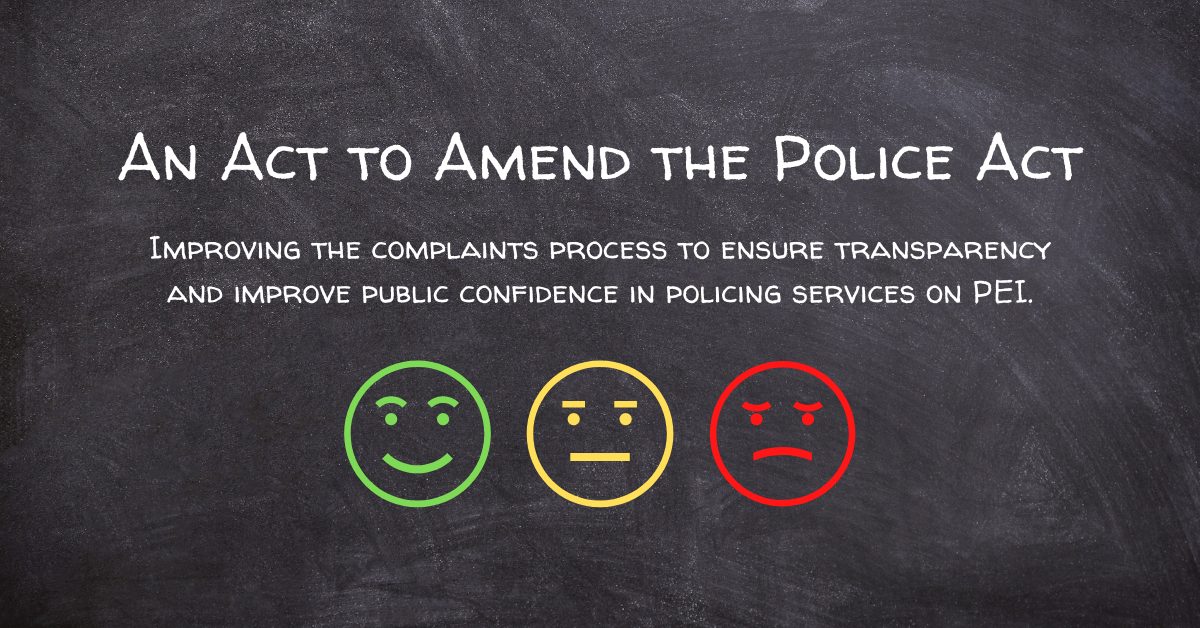 An Act to Amend the Police Act
Official Opposition
April 26, 2021

With the exception of RCMP complaints (which are regulated federally), municipal police complaints in PEI are governed by the Police Act. Under the Act, complainants have 6 months to lodge a complaint. There is no discretionary ability for the person investigating or reviewing a complaint to consider a complaint made outside of that time window. The current process leaves Islanders with one of the most restrictive complaints processes in the country.

The 2017 PEI Police Review identified the restrictive complaints process as an issue. Other provinces that have recently conducted reviews of policing have similarly identified issues with restrictive complaints processes and have recommended making those processes more accessible. For example, the Nova Scotia Human Rights Commission’s 2019 Halifax, Nova Scotia: Street Checks Report investigated the relationship between race and police checks and, through community consultations, identified issues with the six-month period to file a police complaint. The time period was increased to 12 months in January 2021.

The Official Opposition’s proposed Act to Amend the Police Act would increase the time available to file a police complaint from 6 months to 12 months, consistent with common practice in Canada, and would also allow the party responsible for investigating a complaint to hear complaints outside of the the 12-month period if there are good reasons to do so and it was not contrary to the public interest.

We want to hear from you

Download a copy of the proposed legislation here: An Act to Amend the Police Act – Consultation Draft (v01) – April 2021

As part of our consultation on this legislation, we are inviting Islanders to send their thoughts, comments, and questions to the Official Opposition by emailing officialopposition@assembly.pe.ca or by calling the office at (902) 620-3977.

You can also submit your feedback online by completing a survey here: https://forms.gle/sdnehzkQd47ENCZg6

Please be sure to submit comments no later than Sunday May 2, 2021.