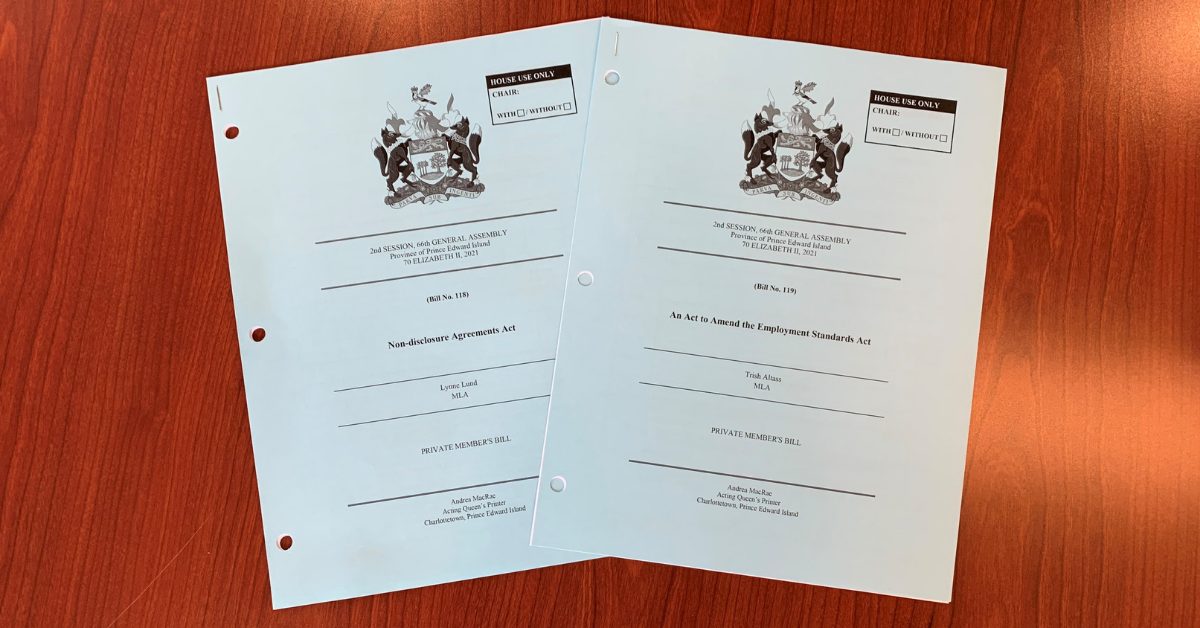 Official Opposition introduces two pieces of key legislation that offer first of its kind protections for Islanders against discrimination, harassment, and inequality

Charlottetown, PE – Today the Official Opposition Green caucus tabled two pieces of key legislation. One is designed to protect Islanders from harmful non-disclosure agreements and the other to tackle wage gaps through increased transparency in pay.

The first piece of legislation is the Non-Disclosure Agreements Act. The purpose of this legislation is to support and protect Islanders who have been subject to harassment or discriminaton from being silenced through non-disclosure agreements.

“Non-disclosure agreements (NDAs) have been used to silence victims of unlawful acts. We must protect people by preventing NDAs from being misused,” said Lynne Lund, Official Opposition Critic for Justice and Public Safety. “This legislation will offer critical protections and support for Islanders who have been subject to harassment or discrimination.”

The second piece is pay transparency legislation. This bill tackles unfair wages and wage gaps by prohibiting employers from asking a job applicant for their past pay, requiring employers to include expected compensation in publicly advertised job postings, and by creating anti-reprisal protections where workers disclose or discuss their compensation in the workplace.

“Often employees are prevented from sharing and discussing salary compensation with their coworkers. This, unfortunately, has led to wage gaps and pay disparity amongst employees,” said Trish Altass, Official Opposition Critic for Economic Growth, Tourism, and Culture. “This legislation will require employers to disclose salary information in job postings, and to protect workers who discuss salary compensation with other employees. It would also protect against past pay being used to inform future wages, especially where that past pay was discriminatory.”

Together these two pieces of legislation offer robust protections that will create a fairer province for Islanders who face discrimination, harassment, and inequality. If passed, PEI will be the first province to regulate non-disclosure agreements and the second to introduce pay transparency measures.