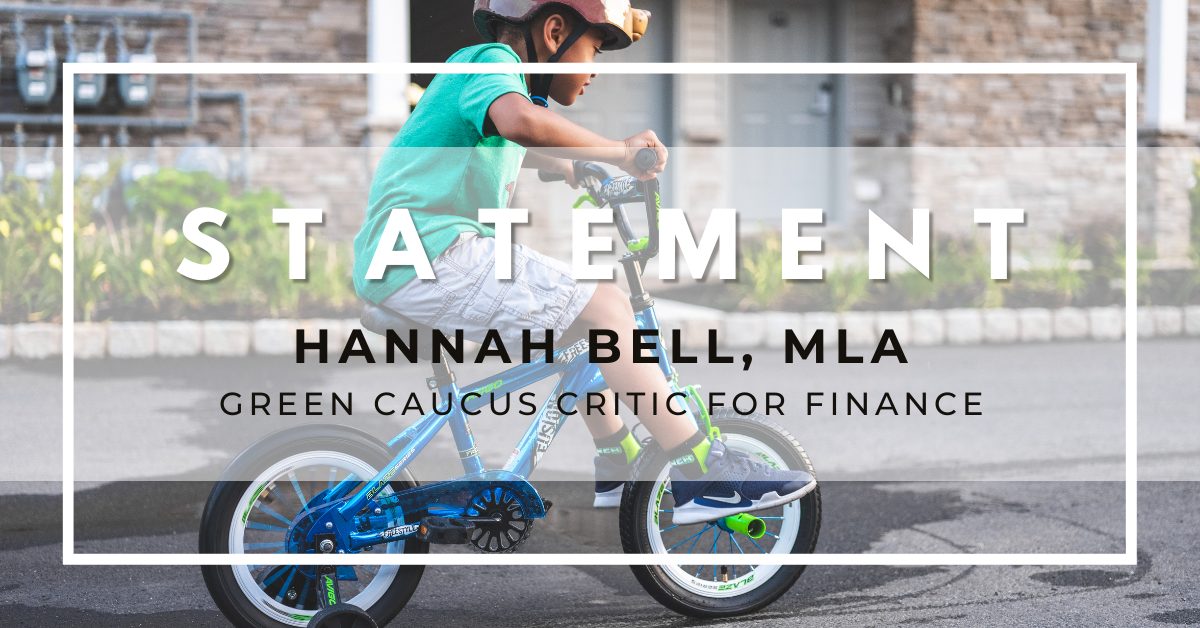 Statement on the failure of the King government to deliver its promise of a bike rebate for all Islanders
Official Opposition
May 17, 2022

Statement by Hannah Bell, Official Opposition Green Caucus Critic for Finance, on the failure of the King government to deliver its promise of a bike rebate for all Islanders

It was a budget announcement that the public and the Official Opposition celebrated – “…starting this summer, we will be providing a $100 rebate on the sale of any bicycle purchased in Prince Edward Island to encourage active transportation and active living.“ (2022 Budget Address, pg 11)

As this government has shown us over and over again, what they promise and what they choose to do are not the same thing. As I have said before, “The devil is in the details.”

According to information that has been shared with retailers, we know now that the bicycle rebate program will launch on May 20. First the good news. The program will be an instant point of sale rebate at participating Island retailers. Our thanks go out to retailers who are taking on the extra administration and paperwork to deliver this program on government’s behalf.

Now the bad news. The rebate only applies to bikes that cost at least $150. So if the new bike you want to buy costs $109, you will get no rebate at all. However, if you can afford to drop $1600 on a brand new mountain bike – you’re in luck.

More bad news! The restrictions government is choosing to put on this program also means if you want to save a few dollars by buying a used bike, too bad. The rebate doesn’t apply. Neither does it apply for specialty bikes like adult tricycles or cargo bikes.

We have heard from so many Island families that were hoping this program would be the way they could afford to get bicycles for their kids and start living a more active healthy lifestyle this summer. Instead, they’re left out, yet again, by a government that just cannot understand that “for all Islanders” doesn’t mean “some conditions apply; only for those that can afford it.”

Islanders have already tightened their belts to the last hole. They have done all they can to cut and save. I am calling on government to reconsider this ill-conceived and discriminatory program, and remove the price floor.