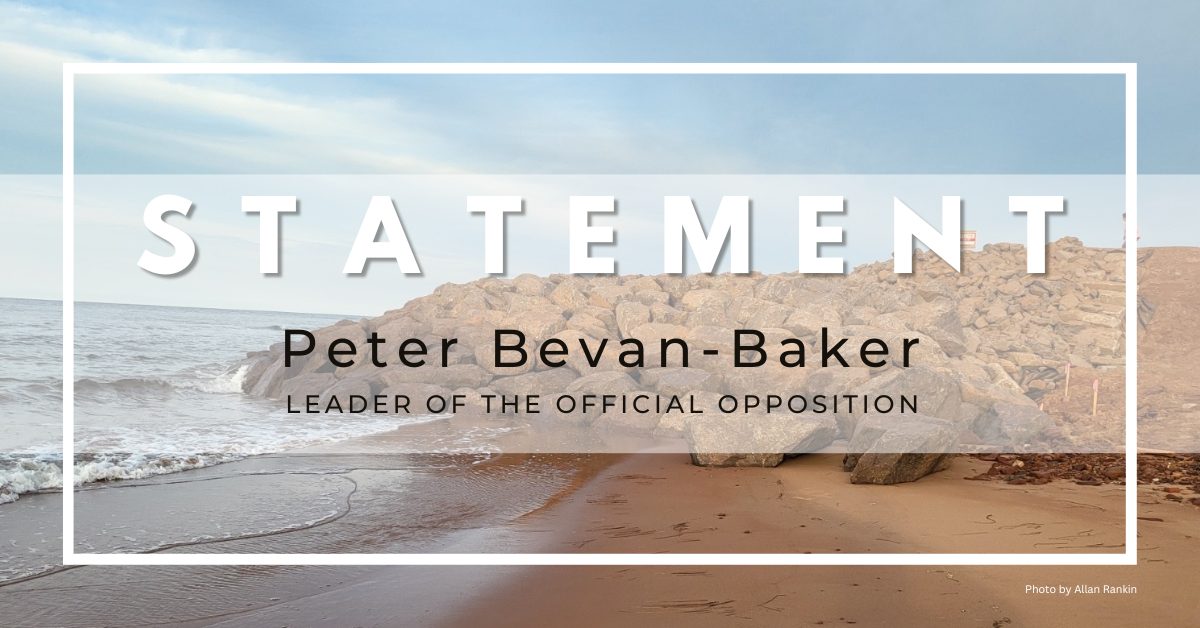 Statement by Peter Bevan-Baker, Leader of the Official Opposition, on development at Point DesRoches

Anyone who has wandered the beautiful north shore at Point DesRoches this summer would have been dismayed to see the destruction of a pristine beach and historical property. If you have tuned into Island social media over the last 10 days, you are more than aware that it has sparked a wave of anger that will rival what we are likely to see when Hurricane Fiona pays our region a visit.

For those of us who have for many years been trying to protect the dwindling viewscapes, unspoilt beaches, and architectural gems that dot our province, this particular development represents a lightning rod that has channelled decades of growing discontent.

Here’s what we know about the situation.

A 17 acre piece of land including a former train station that was turned into a cottage was sold back in 2020. The buyer is an investment company with an Ontario address. The sale was approved by Premier King’s Cabinet. The new owners have torn down the old cottage and are building a new structure closer to the beach.

Associated with this new building is a massive amount of new imported hard rock armoring reaching out beyond the high tide mark. This is concerning for a couple of reasons.

First, it cuts off access to the beach which is a direct violation of the provincial guidelines for coastal development. On PEI all of the beach below the high tide mark is public and there is a minimum setback of between 75’ and 100’ for any building located near a shore.

Second, this type of armouring of the shoreline is destructive and leads to more aggressive erosion on either side. This impacts other people’s properties and creates an environmental disaster for the shoreline, the aquatic environment, and the plants and animals that live there. In fact, the guidelines recommend against the use of armouring.

Coastal erosion is an issue that has been worsening as successive governments have ignored climate change. We are now witnessing the effects of this to extremes we are unused to seeing. This is something we can no longer turn a blind eye to. It is time for us to reconsider the impacts of climate change and adjust our response accordingly. For example, it is becoming clear that we need to increase setbacks to accommodate higher rates of erosion and eliminate the dependance on shoreline armouring.

But there is also a community concern here that is so much more than a building being replaced. Since news of the development broke on social media our office has received a lot of correspondence from Islanders expressing anger and frustration. They are quite rightly concerned about how it seems anyone can come in and make large-scale and destructive changes to our shoreline without any repercussions.

I have reached out to the Minister of Agriculture and Land and her department numerous times. My emails went unanswered for over a week. When I finally received an answer back from the department this week, it was unsatisfactory, vague, and gave no clear answers on what would be done to address Islanders’ concerns.

The questions that Islanders have deserve consideration and answers from their government. They are asking:

The fury that has been unleashed by this development has galvanised a community that is saying with one loud, clear voice, “Enough. We are fed up and demand government finally step up and protect the precious natural heritage of our province.”

The current administration cannot fail as their predecessors have: Islanders will not stand for it any more.