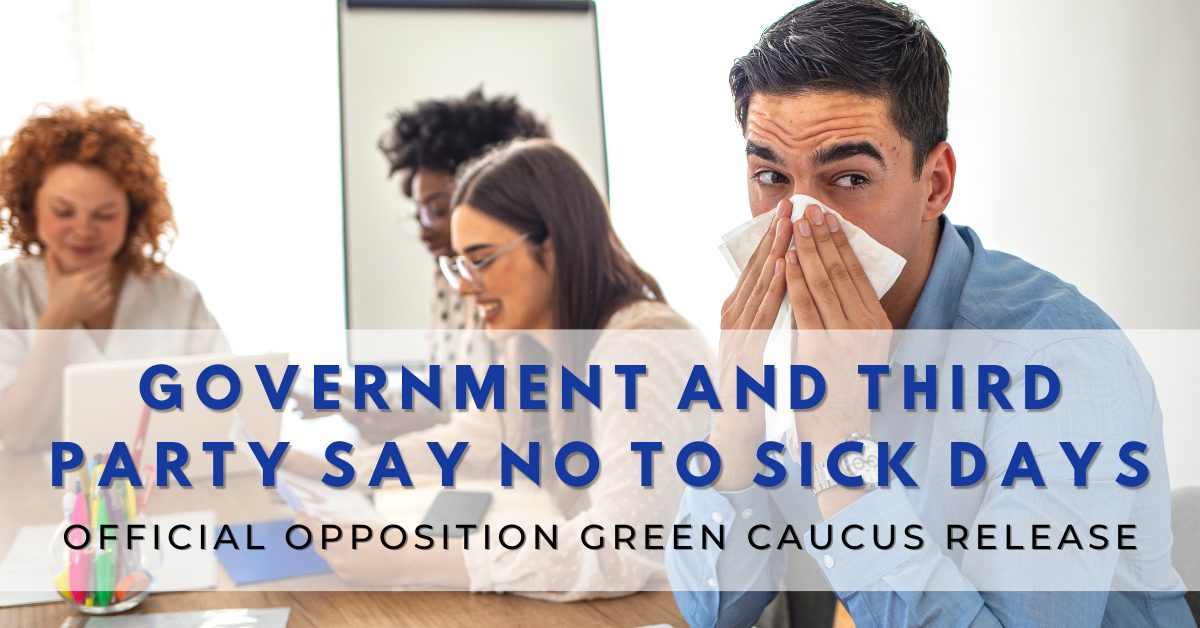 Charlottetown, PE – Today Islanders got a glimpse of the values of both the Conservatives and the Liberals when they voted as a block to deny Island workers measures to protect their health and the health of the general public.

“It is very clear today which party really cares about people and it isn’t the Conservatives or the Liberals,” said Trish Altass, Official Opposition Green Critic for Economic Growth, Tourism and Culture.

During debate it became clear that government was captured by myths promoted by business lobbyists.

“Despite presenting evidence that paid sick leave is beneficial to both workers and businesses,” said Altass, “government was more committed to parroting talking points against providing employees the ability to stay home when sick.”

The third party also attempted to misrepresent and conflate issues to make it seem this legislation would close businesses.

Another tactic by the governing Conservatives was to kick the issue down the road further by pointing to an ongoing employment standards review that is not slated to be finished until at least July 2023.

“Waiting for the employment standards review report to be completed, for new legislation to be drafted, for it to be consulted and debated, means at least another two years of employees being unprotected,” said Altass. “It is unconscionable for this government to be arguing against protections for workers.”

Even when given the opportunity to suggest a number of sick days that would be acceptable to them, no MLA from the Liberal or the PC caucuses would give an alternative number. Instead they voted to give no paid sick days to Island workers. This loss is ultimately a loss for people. The Official Opposition Green caucus will continue to stand up for workers and fight for better working conditions for all Islanders.