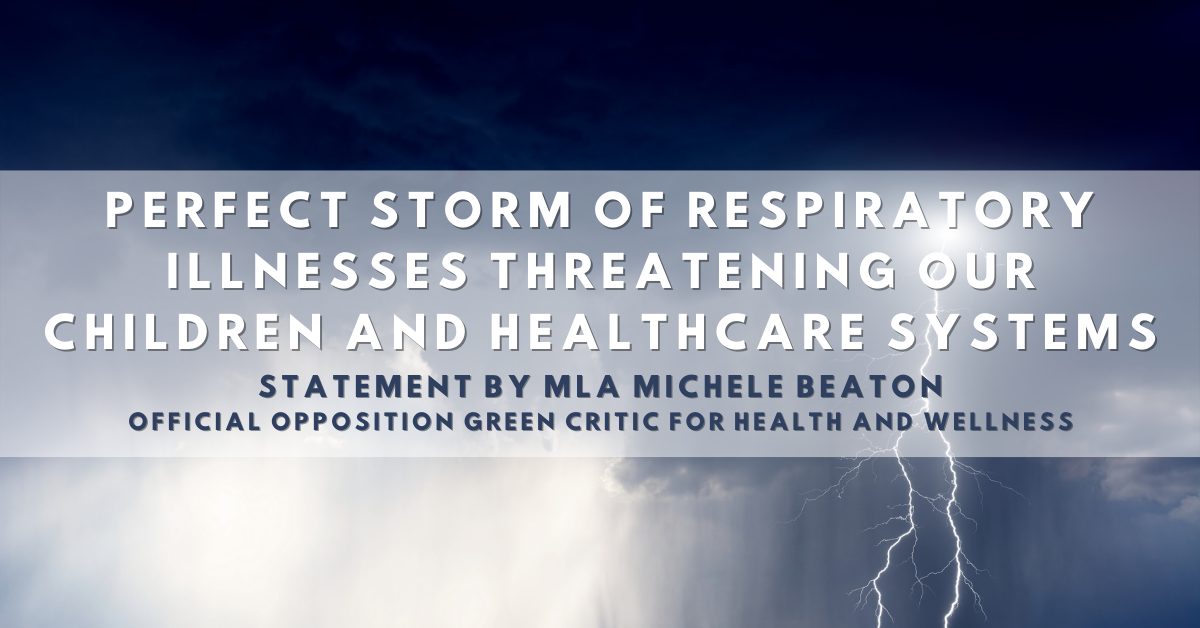 A perfect storm of respiratory illnesses is threatening our children and healthcare systems
Official Opposition
December 8, 2022

Statement by Michele Beaton, Official Opposition Critic for Health and Wellness, on perfect storm of respiratory illnesses threatening our children and healthcare systems

Just months ago we all watched the news closely as Fiona headed up the coast. As time drew near, experts and everyday Islanders could clearly see the storm was coming, and it was going to be bad. Premier King and his team were seemingly the only ones who didn’t, or wouldn’t, see how destructive this storm would be. Because Premier King refused to plan for the disaster we all knew was coming, Islanders suffered.

Right now there’s a storm of another kind brewing across our country. This time the stakes are much higher and we are in no way ready for it. This storm is the wave of sicknesses, including influenza and RSV, that are hitting some of our most vulnerable Islanders – our children. Already we are seeing increased school absences, increased visits to the ER and longer ER wait times – recently more than 10 hours. This may be just the beginning.

In our nation’s capital, the Red Cross has been called in to provide assistance because their health system is so overwhelmed. In Calgary, respite care has been pulled from pediatric hospice centres. The Janeway in St. John’s had to cancel some surgeries and the IWK, the Maritime’s children’s hospital, is facing long wait times and concerns of having to cancel surgeries. What gives us the confidence that our province will weather the storm better than other provinces have?

Here in PEI, flu numbers appear to be 20-30 times higher than what is typical at this time of year. Hospitalizations have nearly tripled week-over-week. Alarmingly, it seems illnesses with children and seniors are driving these numbers. There also doesn’t seem to be any sign these numbers are slowing down.

Premier King has the evidence, he sees the storm, he must know this is a bad one. How has his government prepared for this? What steps have already been taken to address this impending crisis affecting our children? What has been done to increase capacity in both Unit 5 and Pediatric ICU? What agreements has Premier King made if the IWK is no longer able to accept our children? Has there been proactive training of nurses to deal with pediatric patients? How has the shortage of acetaminophen and Amoxicillin been addressed? Why was the Cough and Cold Clinic on Park Street not transitioned to a Pediatric Assessment Centre? With only 19 per cent of children under 10 vaccinated for influenza, why hasn’t the Premier gotten in front of a camera to encourage the public to get vaccinated? Why didn’t government make plans to deliver flu vaccines in schools and childcare centres ahead of an anticipated bad flu season?

Why isn’t the Premier broadcasting from every available source how this storm will be weathered; or has the captain abandoned the ship? Islanders need a Premier who will stand up and take action. Not only are our children being put at risk and forgotten, but now the surge in respiratory illness is threatening to delay and compromise care for thousands of Islanders. That is unacceptable.

Premier King, what is the plan and how are you managing the risks of this perfect storm before it is too late?