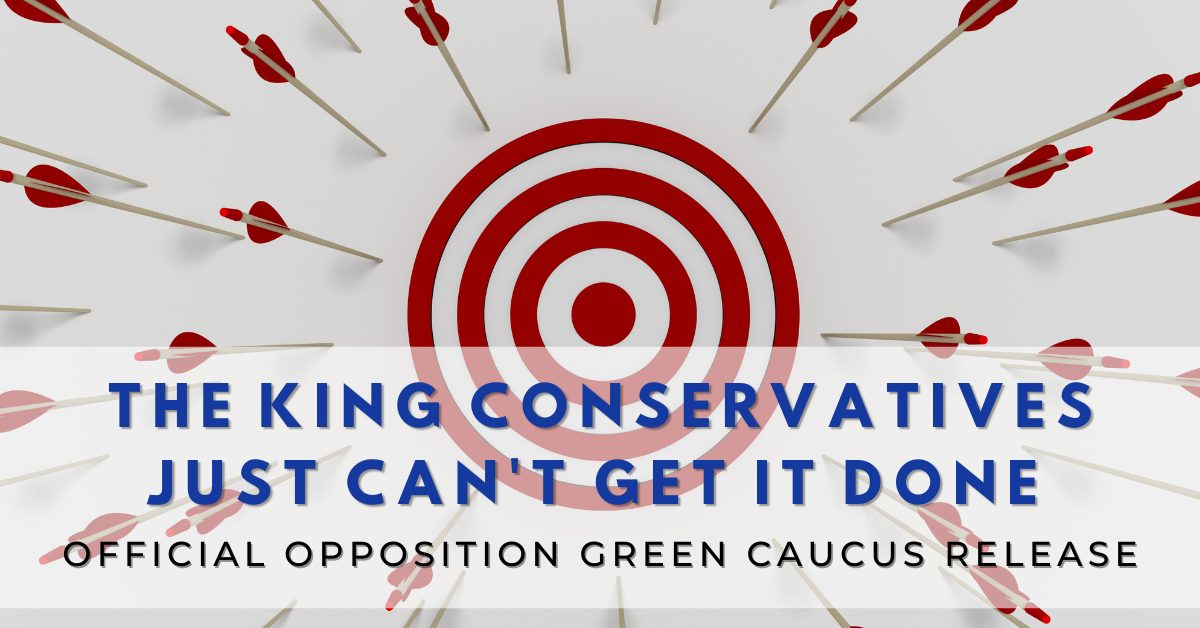 The King Conservatives just can’t get it done

Charlottetown, PE – The fall sitting of the Legislative Assembly of Prince Edward Island concluded today. The sitting clearly showed the ineffectiveness of the King government, with Premier King and his Cabinet struggling to address the serious issues facing Islanders and our Island home.

“After nearly four years on the job one would expect the kinks to be worked out and things to be improving,” said Peter Bevan-Baker, Leader of the Official Opposition. “However, life has not improved under Premier Dennis King. From the reckless destruction of our shorelines, to disrespecting our frontline health workers, to denying protections for Island workers, to moving to centralize healthcare services and hurting rural PEI, his PC government is failing Islanders in almost every way.”

Under the leadership of Premier King, PEI’s shorelines have been under attack by reckless development in environmentally sensitive areas.

“This government has not only turned a blind eye to destructive development on our beaches and in buffer zones, but it also seems Premier King’s Conservatives have actually approved such development,” exclaimed Bevan-Baker. “From Point Deroche to West River to Brighton, and other areas, this government is approving wholesale destruction of our beautiful shorelines.”

The King government also managed to drive a wedge between healthcare workers by picking and choosing which workers receive retention bonuses.

“All of our frontline workers have worked tirelessly under extremely difficult circumstances and challenges,” said Bevan-Baker. “These difficulties have been made even harder by the Premier picking select groups for recognition while ignoring others.”

The PCs and Liberals let Island workers know exactly how they feel about them. The Official Opposition Green caucus presented legislation to give workers 10 paid sick days but all the PC and Liberal MLAs said no to any paid sick days and denied workers job protection.

During this sitting the King Conservatives introduced legislation to remove the physician complement for rural communities.

“This legislation introduced by the King government demonstrates a desire of Premier King to centralize healthcare,” said Bevan-Baker. “This decision will harm rural healthcare and rural Islanders, many who the PCs were elected to represent.”

Despite an unwilling and uninspired government, the Official Opposition Green caucus was able to accomplish some important things for Islanders.

“Our caucus pressured government to finally bring forward the often promised and perpetually delayed Residential Tenancy Act,” said Bevan-Baker. “We were pleased to see government agree that a rental cap was necessary to protect tenants from runaway rent increases and to provide stability and predictability for landlords.”

This sitting the Official Opposition Green caucus also unanimously passed motions to provide voting rights to permanent residents for municipal and school board elections, increase access to ovarian cancer drugs, and access to contraceptives for Islanders.

“It was also good to see that finally a full carbon rebate will be returned to Islanders. This is something we have been calling on for years,” said Bevan-Baker. “While I am glad this is happening, I am frustrated that it had to come from the federal government because the Premier would not give up his fossil fuel subsidies. Because of this reluctance on his part, Islanders have missed out on thousands of dollars in rebates over the last few years. Unacceptable.”