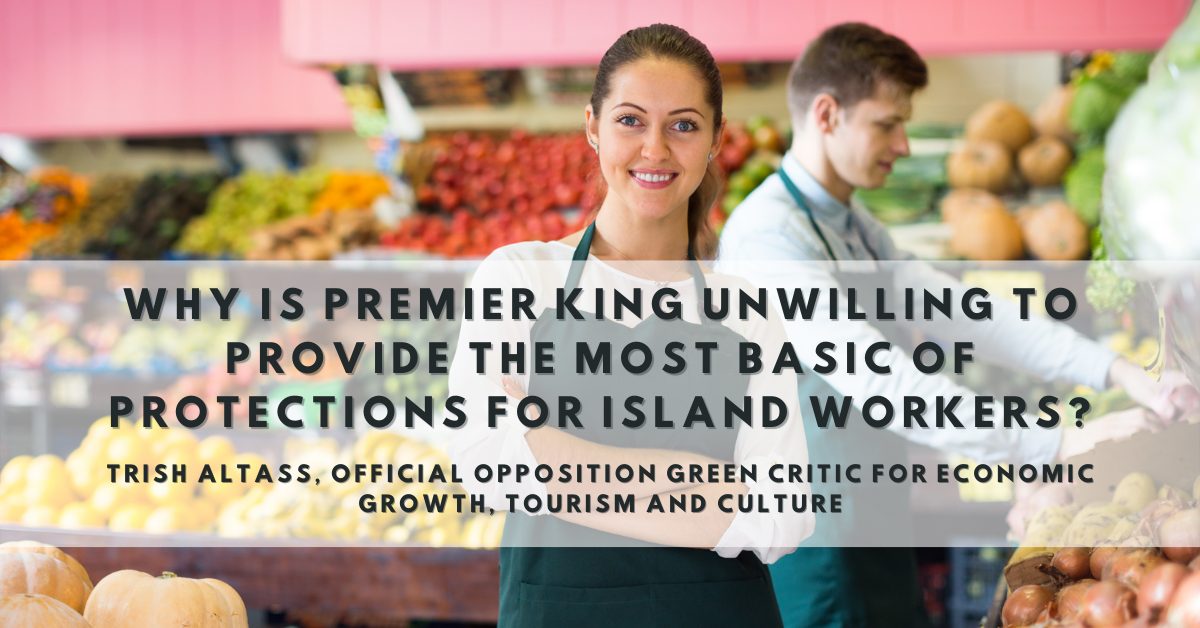 Why is Premier King unwilling to provide the most basic of protections for Island workers?
Official Opposition
December 13, 2022

Why is Premier King unwilling to provide the most basic of protections for Island workers?

Originally published in The Guardian December 13, 2022

Canada’s healthcare systems are under incredible strain, and Prince Edward Island is no different. Respiratory illnesses are resulting in more sick Islanders and more visits to healthcare providers. PEI should be doing everything it can to prevent the spread of illness.

Earlier this fall, I introduced legislation to give workers 10 days of paid sick leave because every worker should have the right to stay home when sick. This is sensible policy endorsed by health experts, economists, and researchers.

First, the federal Minister of Labour has called on the province to implement 10 days of paid leave. This is similar to what has been implemented for federally regulated workers, and it is in line with what most OECD countries offer their citizens.

Second, Statistics Canada data shows that, on average, Islanders missed 9-10 days of work due to illness in 2021. It was important to me to propose evidence-based legislation that was responsive to the real needs of Islanders.

Paid sick leave has a number of positive benefits for not only workers, but our communities and our healthcare system. Paid sick leave is correlated with greater access of preventative health care.1 Paid sick leave is associated with reduced likelihood of workplace injury.2 In the US, an inability to work from home and no paid sick leave were associated with an approximate 50% increase in the risk of influenza-like illness.3 One background paper for the World Health Organization suggested productivity losses due to working while sick were up to three times higher than loss in productivity due to sickness related absence.4

The process on this bill was frustrating. There was little to no engagement on this legislation from either the PCs or Liberals—the extent of their engagement was to vote against workers having any increase in legislated paid sick leave and the job protection that comes with it. This was concerning, especially as we experience an extra severe respiratory illness season and our hospitals are struggling to keep up. Supporting workers to stay home while sick is exactly the kind of policy we must be pursuing. Yet, both the Liberals and PCs said no to providing workers with legislated and permanent paid sick leave.

Premier King says he wants to wait until a review of the Employment Standards Act is complete, but this is just kicking valuable protections down the road when workers need them now. Workers simply cannot wait for a complete review of the entire Act to be done, new legislation to be drafted, tabled, and finally passed. Premier King has said over and over that he follows the evidence to make the right decision, but here he shows that when it comes to his actions, he does not.

Workers are the backbone of our Island economy. As we face labour shortages across all sectors, now more than ever we must do everything we can to make PEI the best place to live and work. Our workers are simply not being treated with the dignity and respect they deserve under Premier King. The Green Party will continue to stand up for Island workers, even if the Liberals and PCs will not.