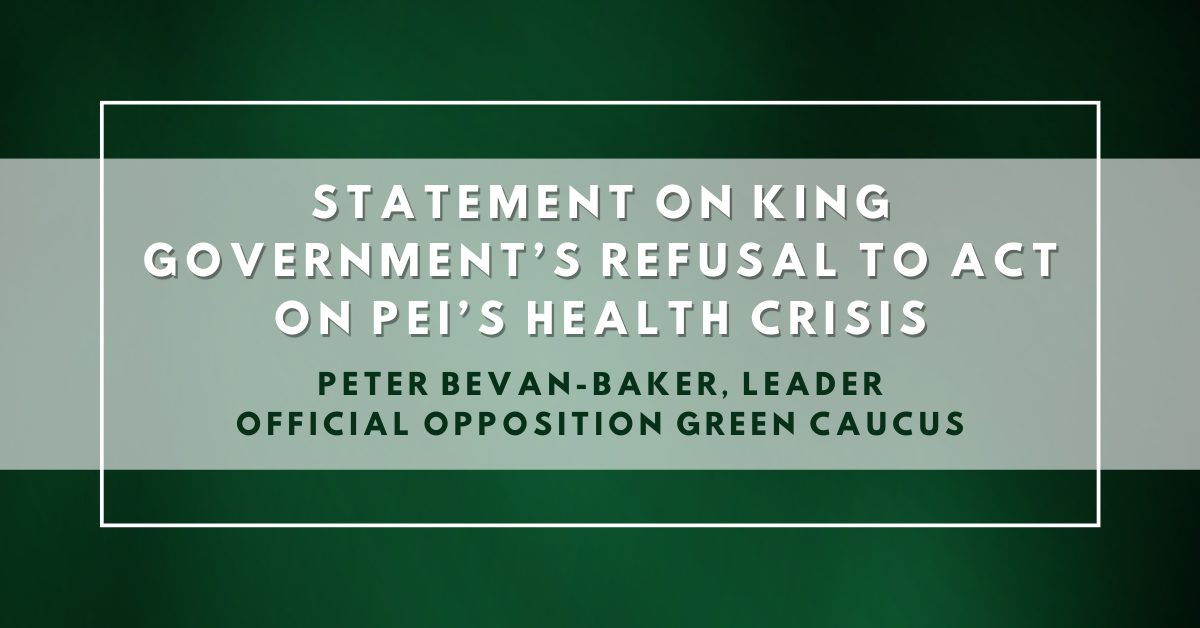 I read with interest comments made by Health and Wellness Minister Ernie Hudson on the recent resignation of Health PEI Board chair Derek Key.

Mr. Key expressed his frustrations very plainly in a letter to the Premier when he resigned. He stated concerns about Health PEI’s lack of independence from government and that Health PEI, not the Department of Health, should be in charge of hiring.

The complex and convoluted hiring process that Mr. Key refers to has burdened our province for years. He is also not the first to retire from the Health PEI Board over the lack of independence this Crown corporation should have. Health PEI can only operate effectively and efficiently when it is truly at arm’s length from political interference. Let’s not forget that the entire board of Health PEI resigned back in 2018 when legislative changes brought in by the previous Liberal government severely curtailed Health PEI’s autonomy and authority.

The Green Party caucus has consistently called for greater independence for Health PEI. We’ve done this in the House during debate, by introducing our own amendments to the Health Services Act—though the old parties refused to go as far as is necessary to make Health PEI truly independent. In our 2019 platform we committed to: “Review the legislation for Health PEI with the objective of strengthening its independence and providing greater accountability for health outcomes.”

Successive governments, both Red and Blue, have preferred to retain control over major health care decisions for purely political reasons. When Minister Hudson says hiring in health care is “under control”, he’s not wrong: it is under the control of a government that favours political outcomes over those that would be best for the system and for Islanders as a whole.

So what will the King government do, after four years of showing that they are no different from the previous Liberals?

They will do a study, oh my apologies, a “module”.

Minister Hudson, in what he probably imagines as a flash of boldness and innovation, tells us: “I’m anticipating by the end of this month, that we will have a module in place that will give us a projection, not only for the next one year, three years, five years, but for 10 years down the road as far as our [health human resource] requirements are going to be across the board.”

Did you know Minister Hudson was the health minister for the entirety of Mr. Key’s career as Health PEI Board Chair? It seems the Minister has been completely absent in response to the concerns raised by the chair. In fact, Mr. Key identified these concerns at the Health PEI AGM in 2021 and again in 2022, yet it took a resignation letter before the minister would commit to having his department “delve into [the concerns], to have those discussions, to review.”

This complacent leadership is unacceptable. It will do nothing to get us out of this healthcare crisis.

This is not a visionary new policy to attract and retain health care professionals, and certainly not courageous leadership and innovative programming. This idea presented by the Minister is simply a study to tell us how bad things will be next year, the year after, and all the way to 2033. It’s a deliberate ploy to avoid taking action.

For decades successive governments on PEI have recognised that the trajectory of health care was deeply worrisome. For decades each one has sat on their hands and watched the system unravel. We don’t need another study. We need a government that has a vision, can develop a comprehensive plan, and can execute it properly.

Over the last four years, the King government has been defined by having no vision, being unable to develop a plan, and failing to execute on a litany of projects (think midwifery, shovels in the ground of day one on a new mental health hospital, healthcare homes and neighbourhoods, the expanded dental program, any sort of housing initiatives, and so much more).

Islanders deserve a health care system they can have confidence in. They deserve a government that looks ahead, thinks ahead, has the courage to tackle the big challenges of our day, and most importantly gets things done.

The King government is not that.